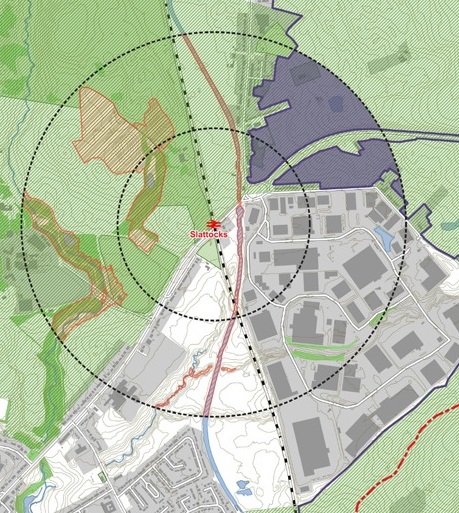 The RRCS includes a proposal for a new rail station at Slattocks along with developments around current stations along the Calder Valley line at Castleton, Rochdale, Smithy Bridge and Littleborough.

It also mentions linking the East Lancs Railway (ELR) to the mainline at Castleton.
The ELR is the heritage ‘steam’ line that currently runs from Heywood to Rawtenstall.

The document shows 400 and 800 metre perimeters around the rail stations but fails to explain what these mean.

When lockdown conditions are eased we’ll meet with our local Councillors & MPs about the Rail Strategy and other issues affecting the area to try to convince them that development via a Brownfield First policy is the best way to properly protect the Green Belt.

What do you think? 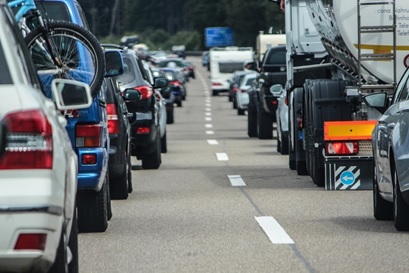 You may remember we put up Nitrogen Dioxide (NO2) monitoring tubes around the area in November last year (2019).
NO2 is one of the air-borne pollutants in vehicle emissions and is known to cause health problems

Exposure to high pollution episodes can cause immediate harm to everyone by:
– Irritation of the eyes, nose, and throat
– Wheezing, coughing, chest tightness, and breathing difficulties
– Worsening of existing lung and heart problems, such as asthma.
As the heart, lungs and blood cells pump oxygen to every part of the body, they also come into contact and carry along toxic pollutants like NO2 and other noxious air-borne particulates.
The body must therefore work harder to supply oxygen and overcome the effects of these chemicals, causing the above symptoms.

This is where the tubes were located

And the results we got were:

According current regulations the exposure limit to NO2 is 40 ug/m3 (micrograms per metre cubed).

So one result is over the recommended limit

Not surprisingly, the monitor tube at St Johns School gave the lowest result, given that it’s furthest away from traffic on the main road.

Whilst the results are somewhat surprising we will soon be able to get a more accurate result using a more sophisticated air quality monitor, pictured below, which ‘tests’ for a wider range of substances.
The British Lung Foundation (BLF) who are supplying the new monitor are also keen to do further work with us around the health & clean air issues. 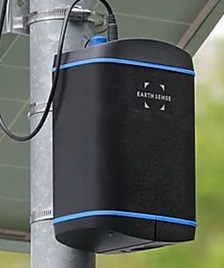 Hello to everyone hope you’re all fit & well and staying safe.

We’re continuing to develop our TSJ neighbourhood plan for the area and have applied for grant funding so we can engage a planning consultant to help pull the plan together.

We will soon be out and about again putting up signs and banners to remind people how precious the green belt is to all of us.
Please let us know if you’d like one of the signs on your property. Just email info@tsjnf.org

We are doing all this in preparation
for the next GMSF consultation
which will probably be in Autumn this year.

However, GM Mayor Andy Burnham has said that due to COVID-19 the plan will now be amended.
This is what he’s said in a recent press conference (3rd June 2020) about the GMSF plan:

“It’s being reviewed…. The economy is going to face a challenging period and that will have an implication for the GMSF, particularly its five year delivery plan. Equally, there may be more opportunity for houses to be built in areas where the high street could be hit by the downturn…”

On the face of it, this looks like good news in terms of protecting Green Belt from development, but it’s far from clear that it actually means that.

The GMCA’s ‘Greater Manchester’s Plan for Homes, Jobs and the Environment’, commonly known as the Greater Manchester Spatial Framework which was out for public consultation earlier in 2019, promotes a vision for ‘clean air and a flourishing natural environment’. This is one of many aspirations stated in the document, couched in fluffy political language, which directly conflicts with the GMCA’s primary ambition to offer up swathes of our local greenbelt to developers and land speculators. Reducing the green space around our towns will increase air pollution, putting the health and wellbeing of local people at higher risk of lung and heart disease.

“Reducing the green space around our towns will increase air pollution“

The 152 roads in Greater Manchester that breach air pollution levels. The data doesn’t include motorways!

We’ve contacted The British Lung Foundation (BLF) who have offered to supply us some air quality monitors. This will allow us to measure air pollution levels near our busiest roads and particularly those that are close to schools and community centres.

More evidence is emerging around the detrimental effects of air pollution: a study (published last year in the journal ‘Circulation’ www.ahajournals.org/doi/full/10.1161/CIRCULATIONAHA.118.034856)
reports an association between lower levels of air pollution (small particulate matter and nitrogen dioxide) and changes to the structure of the heart in people who did not have pre-existing heart disease. This adds to the growing evidence of the damaging effects of ambient pollution even in the setting of relatively low exposure levels. The authors recommend that ‘efforts to reduce air pollutant emission should be prioritised in public health initiatives and legislative measures’.

Taking any areas out of our local Greenbelt
will only make air pollution, and our health, worse!

This is particularly relevant to young children and their long-term health.

At the recent Breathing Space conference in Manchester, organised by the Save Greater Manchester’s Greenbelt (SGMGB) group, no one was left in any doubt that the GMSF rewrite does not go anywhere far enough in taking into account many people’s concerns, particularly about the Greenbelt.

Andy Burnham and the ten local Councils comprising the Greater Manchester Combined Authorities (GMCA) are not meeting residents’ expectations – in protecting Greenbelt; having a ‘Brownfield First’ policy; and in truly taking on-board people’s concerns about the future on their communities.

Despite the glossy brochure rhetoric, they don’t seem to be listening to what people have said in response to the first nor second consultation.

So the Greenbelt Groups across Manchester have tried to emphasise where Andy and his team, and the system they’re working with, have gone wrong and can really make a positive difference.

The Breathing Space conference saw presentations on: Clean air; Public participation in planning; Planning and land speculators; and What makes a viable neighbourhood.

Whilst all the experts gave excellent presentations, we were particularly impressed by Dr Quintin Bradley’s presentation ‘Planning and land speculators’. Dr Bradley powerfully highlighted how the current planning system is stacked against ordinary people and the local councils in favour of the developers:

‘a planning regime intended to increase the supply of housing has actually doubled the length of time taken to build houses, created a new market in land speculation, incentivised housebuilders not to build, and forced local authorities to allocate more than twice as much land as actually needed for housing’.

Some of the headlines from the presentations are:

Those relating directly to the Thornham St John’s Neighbourhood Area and others located close to our community are listed below.

It should be stressed that these are just proposals, and
no planning applications relating to them have been lodged at the time of writing.

Below are links to each of these proposals:

Following the second GMSF Consultation all the responses have been published.
If you submitted comments to the consultation you should have received an email or letter from the GMCA thanking you.
In this they will have given you a link containing a unique number through which you can search their spreadsheet for your comments.

The link below will take you to the ‘GMSF Responses’ web page and give you instructions on how to search for your comments, and those of the 17,000+ people who also wanted to make sure their voice was being heard.

Here’s the link to the GMSF Responses web page:

Redrow Homes has produced a glossy PR document as part of their comments to the recent GMSF Consultation (Jan-Mar 2019).
The indicative masterplan for what they call the ‘Manchester Road Development’ uses information from the GMSF documentation to show how they might develop the site.
Showing the All In One Garden Centre as its way in from the main road, they demonstrate how they could use the whole area behind Thornham Cricket Club and St John’s Thornham Church, stretching to Thornham New Road, the M62, and A627M.

At this stage of the GMSF plan, Redrow have decided its time to show their hand and how serious they are in wanting to got hold of this large chunk of local Greenbelt.

There are lots of error and mistakes. We’ll leave you to spot them. 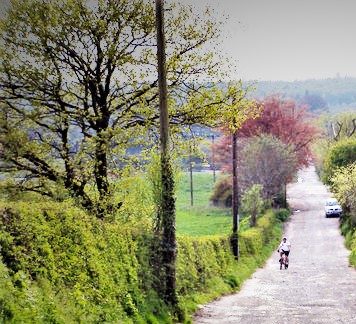 Take a look at the spreadsheet below to check that your comments were included in the consultation.

Many residents from Slattocks and Stakehill sent in comments on the 2nd draft of the proposals.

Out of some 51 separate allocations/sites, our local allocation, GM Allocation 2: Stakehill, had the ninth highest number of comments, some 982.

This shows the strength of feeling amongst the local community in wanting a ‘have a say’ in the future of the area.

The GMCA publicity statement can be seen at the link below.

Results of the Consultation (Jan-March 2019)

The above quote is directly from the Report and reinforces just how much people across Greater Manchester feel about the plans.

Clicking the link below will take you to the GMSF report for September 2019.
Then go to Page 73